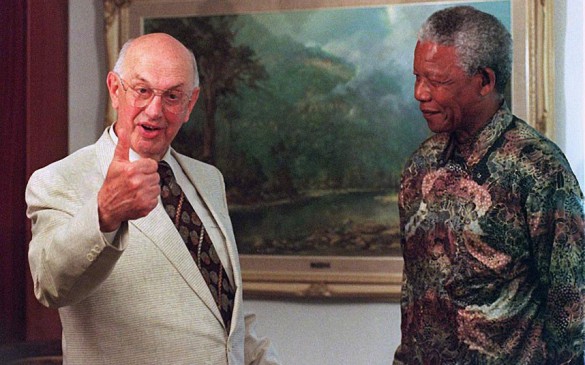 Mandela pictured with known racist and white nationalist P.W. Botha, former prime minister of settler colonial South Africa. Botha is responsible for the death and mangling of countless Africans, but Mandela looks totally smitten! Compromise anyone? This is how one achieves racial harmony!

On this episode we talk with Julian Kunnie about his book Is Apartheid Really Dead?: Pan-Africanist Working-Class Cultural Critical Perspectives. His book argues that the path of capitalism the post-apartheid government has taken signifies a pro-bourgeois position that adheres to the dictates of global market forces. We had a really important discussion with Dr. Julian Kunnie addressing the issues and contradictions that still exist in Azania (South Africa) and the African world. This is part one of a two part series.

This episode features music from Akala from his albums Knowledge is Power Mixtape, Vol.1 and Knowledge is Power, Vol. 2 the tracks are “Get Educated” and “The Fall” ft. Amy True, respectively. We also feature music by Chairman Maf from his Dusted (EP), the track is “Still Water”.