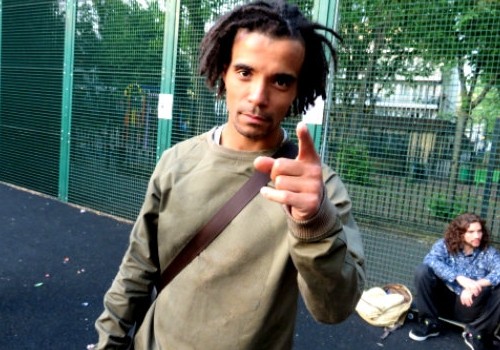 This is an article published by Akala, U.K. hip hop artist, in the Huffington Post on September 16th, 2014. He is addressing the contradictions of an exhibition done by a white man from occupied Azania (aka South Africa) named Brett Bailey who is displaying African people in zoos in the name of “art”. Several Africans, other colonized people, and some Europeans held a protest of this exhibition and a petition was signed by over 23,000 people resulting in the exhibition’s cancellation. Our very own Zari Sundiata signed the petition and offered the astute analysis that “This Shit is a Hot Mess!” We’re sure that was the straw that broke the camel’s back!

Jokes aside….we have posted the article and provided a link to the protest as evidence of what our collective resistance can accomplish. Although this was a small battle to fight, it’s an indication of the results we can achieve collectively. Please note this article is posted as Akala published it on the Huffington Post. C-101 editors modified the article to include pictures with excepts.


So as you have probably heard. An ‘artist’ named Brett Bailey thinks it is creative and innovative to showcase black humans in a mock zoo for the entertainment of white ‘liberals’ at the Barbican Centre. Some people, including the poet Lemn Sissay, have mustered all kinds of defenses for the forthcoming exhibition: free speech, artistic expression, promotion of dialogue about serious subjects, blah blah blah. Some of these reasonings may even appear sound at first glance, until we examine them in the context of the actual world we live in, not the fairy world of a certain kind of white liberal – and their black and brown servants – the same world inhabited by humanitarian imperialisms and post racial posturing.

For those who are unaware, black humans were indeed literally exhibited in zoos, yes zoos, next to chimpanzees and other primates in Europe and America in the late 19th and early 20th Centuries. This is partly the origin of the monkey chants and banana skins that are still all to often aimed at black sport figures today. These zoos formed part of the western propaganda that justified bringing civilization to Africa – that is, killing 10million plus in the Congo, practically exterminating the Herero and Nama peoples and installing apartheid regimes in much of southern Africa, which is to say nothing of the countless millions shipped across the Atlantic, or the induced Irish and Indian famines.

This 21st Century recreation of the very real human zoos is disgusting, deplorable and aims to do none of the things its supporters claim it does. I’ll explain why.

This exhibition, is of course, aimed at the Barbicans primary audience: a certain kind of white people with disposable income. If its aim is to promote dialogue, with whom are these people going to be dialoging in the privileged space of the Barbican so rarely accessed by the wider community? More importantly, what is the psychological profile of the kind of person that would pay £20 a pop to see black humans exhibited in cages?

What is the make-up and behaviour of such individuals? If you are a person of color who is remotely aware of yourself, you have encountered them before and will know their kind well. The kind of ‘liberal’ that likes to tell us how we should feel about our history, like the woman who arrogantly messaged me on twitter – not to ask my reasons – but to let me know that she (the important person) was ‘disappointed’ that I was supporting the petition (below), the kind of person like my year four primary school teacher who informed me that William Wilberforce ‘stopped slavery all by himself’ (white men are that omnipotent you know). The kind of mind that will leave this exhibition (presuming it still goes ahead) congratulating themselves on ‘how far we’ve come’. The question is who is their ‘we’?

Do the proponents of this kind of ‘art’ have a history of making common cause with the very real struggles against racist Euro-American imperialism that the south is still fighting (not least of all in Baileys native South Africa) or would they prefer to engage in masturbating their guilt by seeing black bodies tied, bondaged, broken, powerless? It is that last word, Power that brings us squarely to crux of the matter. Many will actually get a sadistic kick from inert black bodies so pornographically disempowered. This is a common theme; I can’t help but be reminded of the Swedish minister of culture eating the clitoris of a coon cake made by another ‘artist’, this too was meant to provoke discussion, or so our liberal friends told us.

Mr. Bailey’s piece of racist propaganda is cut from that same shitty cloth. As for the minds of the black people allowing their bodies to be used in this way, we could write whole a book and many indeed have, try Fanon for starters. 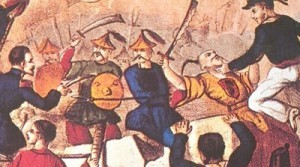 This is a depiction of the Opium Wars between China and Britain. A display with colonized people fighting back is always censored.

Yes art is supposed to be about free expression, but in reality that free expression is always bounded by the political realities of the day. To offer an analogy, would a German artist ever be given a platform as large as the Barbican to make money from displaying real live Jewish bodies piled on one another in a mock gas chamber, would this be considered art? Those who think that comparison is an exaggerated one are either ignorant of historical facts or think African lives are worth less. If this is about promoting a discussion of colonial history why not include ‘strung out on opium’ Chinese people? Why? Because contemporary Chinese power would render any attempt to display Chinese people as lifeless victims quite laughable and thus would not offer the same cheap kicks.

Just to confirm his complete lack of understanding of the issues at hand Mr. Bailey offered the following liberal hodgepodge to explain his thinking

‘Exhibit B is not apiece about black histories made for white audiences. It is a piece about humanity; about a system of dehumanisation that affects everybody within society, regardless of skin colour, ethnic or cultural background, that scours the humanity from the ‘looker’ and the ‘looked at’ “

You see, it’s not about black/white relations at all its about the looker and the looked at. Please, ever so kindly, fuck off. 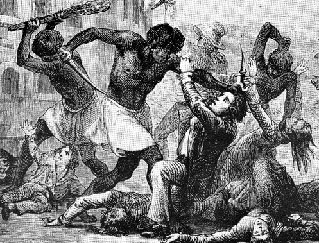 A depiction of the Haitian Revolution. As Akala noted, what could be a better expression of freedom through art than the enslaved liberating themselves from the enslaver!

If ‘artists’ like Mr. Bailey really want to be provocative and create discussion around the subjects of European colonialism and genocidal white supremacy I can think of a million more interesting places they could choose to start. Perhaps the Barbican would consider an exhibition with live white people used as dummies to pose as the many thousands of slave masters and overseers our ancestors majestically hacked to death during the Haitian Revolution? Or perhaps they would consider revising the myth of Gandhi’s uncontested pre-eminence in the Indian independence struggle and instead erect monuments to Bhagat Singh, Queen Rani and others who used the coloniser’s favorite tool -violence of course – against him in their search for freedom? Or to bring the point back to Mr. Bailey – a white South African – directly, why not make art of the dead and mutilated white bodies that Africans killed in the anti-colonial struggles that gained the limited modicums of independence that former ‘settler colonial’ African states have today?

How liberating would it be (especially for white people) to be forced to so viscerally engage with the reality that the freedoms black and brown people enjoy today did not come as a result of Abraham Lincoln, William Wilberforce, or World War 2 but rather from the blood that our own ancestors courageously shed, fighting Europeans with significantly greater military might, as well as their own domestic oppressors and collaborators. We did not, contrary to Hollywood, sit around waiting for white saviours. 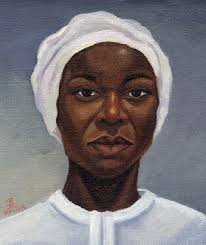 This is art depicting Queen Nanny of the Maroons. Where is the artistic depictions of people such as Queen Nanny who fought against colonialism? That’s an exhibit we would have to make!

Or perhaps, images that do not re-enforce white power do not float the boat of the aforementioned ‘liberal’ types. Perhaps they are not content with the still dominant, international image of Africa; as a disease-ridden, war torn wasteland inhabited by lifeless black skins? Perhaps they are not content with the mass incarceration that serves to privilege them or the black bodies being gunned down by police on a weekly basis in the US and elsewhere? They just need to take it one step further and have niggers back where they really belong, in cages and chains?

The bottom line is this.

The Barbican like almost all other major arts institutions in this country receives public money and thus has a remit to serve the ‘public good’.

A Series of Writings by Chinweizu

February 1965: The Final Speeches (Malcolm X speeches & writings):
Malcolm Setting the Record Straight In His Own Words! Part 3 of 3
Join Our Mailing List