You are here: Home » Library » Political Economy » The Sovereign Psyche: Systems of Chattel Freedom vs. Self-Authentic Freedom by Ezrah Aharone 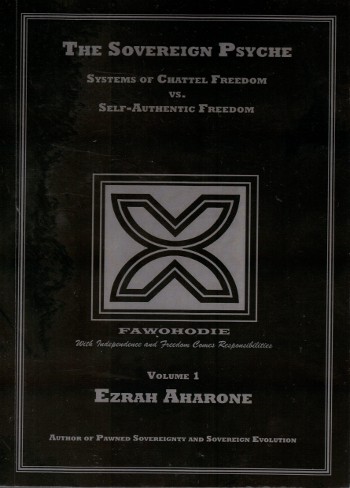 As the first Black president exits office, rather than America being “post-racial,” Black people must walk around like the 1960s with signs blaring: “Black Lives Matter.” In addition, the late Supreme Court Justice, Antonin Scalia, advised Black students to attend “slower track” universities. And a Princeton University study concluded that a 20-year effort like the Manhattan Project (building the A-bomb to nuke Japan), is required to close today’s educational/racial inequalities.

This work, The Sovereign Psyche, asserts that Black America has been unknowingly thrusted into an “intellectual and institutional war” where second-place finishers experience varying degrees of “chattel freedom,” which is when the value of a people is predicated upon the extent to which they serve the interests of others.

Regardless of the issue, genuine solutions entail what we as Black people intellectually and institutionally do for ourselves. If “Black Lives Matter” we must channel the end-uses of our intellect and the resources of our institutions to not only prove and enforce it, but also leverage powers to penalize and/or repudiate violators.

The Sovereign Psyche comprises the necessary intellect and willpower that materializes what Aharone defines as the “3 Dimensions of Sovereignty,” which are: Self-Authentic Freedom, Government, and Development… All of which must operate inter-connectedly, since failures or disruptions in one will render shortfalls in the others.

Although this work centers upon Black/African people, the sovereign functions and frameworks herein are universal in application. In this context, the concepts and criteria presented are far more rational than radical.

The critical question is, to what extent will Black/African people harness and employ the intellect and willpower of The Sovereign Psyche to materialize our own systems and institutions of self-authentic freedom, government, and development? This work offers the ideological apparatus to make this possible, just as others are doing around the globe.