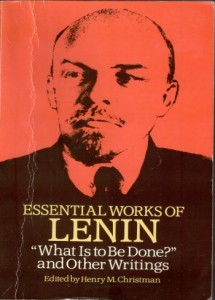 Essential Works of Lenin: “What Is to Be Done?” and Other Writings by Vladimir Lenin

Say what you want about Vladimir Lenin, but what cannot be denied is his skills as a astute researcher and polemicist (skills that come in handy as a revolutionary). The Essential Works of Lenin include four of his most significant works, “The Development of Capitalism in Russia,” “Imperialism, the Highest State of Capitalism,” “The State and Revolution,” and the title text. After reading this text you will have a better understanding of the following: imperialism, the state’s role in society, what the economic theories of the Narodniki movement were and how they affected Russia, what was Lenin’s beef with economism, why Lenin stayed on Eduard Bernstein and Karl Kautsky like white on rice, and much more.