You are here: Home » Library » Political Economy » Handbook of Revolutionary Warfare: A Guide to the Armed Phase of the African Revolution by Kwame Nkrumah 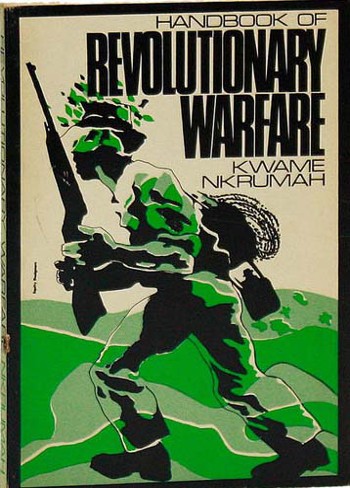 Finally after many, many, many years we were able to get a hold of a copy of this book for the crazy low price of $14.98 plus shipping and handling. It was well worth the read, and is another weapon in our arsenal for the liberation and unification of all African people, and other oppressed nationalities. This is a must read.  If the price on Amazon is too much, then we suggest you hit up your local library. Just to give you a little sample of the book, we have provided Kwame’s preface:

This book has been written during my stay in Conakry. Previous notes I made for a manual of guerrilla warfare for African freedom fighters were left behind in Ghana when I departed for Hanoi on 21st February 1966. The manuscript was handed over to imperialists and neo-colonialist intelligence organisations by the military and police traitors.

This HANDBOOK, presenting a completely new approach will, I hope, help to make possible the successful completion of the armed phase of the African revolutionary struggle for total emancipation and an All-African Union Government.

The Black Power movement in the U.S.A., and the struggles of people of African descent in the Caribbean, South America and elsewhere, form an integral part of the African politico-military revolutionary struggle. Our victory will be their victory also, and the victory of all the revolutionary, oppressed and exploited masses of the world who are challenging the capitalist, imperialist, and neo-colonialist power structure of reaction and counter-revolution.