You are here: Home » Library » Political Economy » The Age of Oprah: Cultural Icon for the Neoliberal Era by Janice Peck 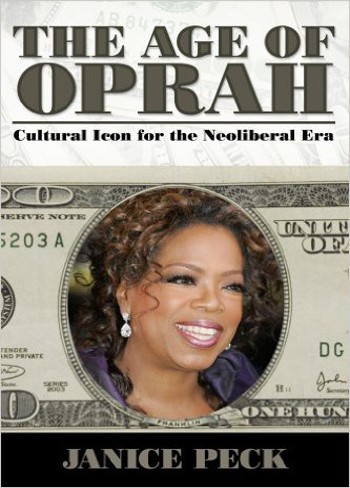 Over the last two decades Oprah Winfrey’s journey has taken her from talk show queen to, as Time Magazine has asserted, one of the most important figures in popular culture. Through her talk show, magazine, website, seminars, charity work, and public appearances, her influence in the social, economic, and political arenas of American life is considerable and until now, largely unexamined. In The Age of Oprah: Cultural Icon for the Neoliberal Era, media scholar and journalist Janice Peck traces Winfrey’s growing cultural impact and illustrates the fascinating parallels between her road to fame and fortune and the political-economic rise of neoliberalism in this country. While seeking to understand Oprah’s ascent to near iconic status that she enjoys today, Peck’s book provides a fascinating window into the intersection of American politics and culture over the past quarter century.

Peck unravels Oprah’s personality as a “post-racial” proponent of neoliberal ideas and victim-blaming which is the hallmark of Black super-celebrities and sell outs in general. She places Oprah’s career within the context of various political eras and details how Oprah conforms her general message and programing to the political agenda of various administrations from Reagan to Clinton. While this book was published before Obama’s presidency, Oprah’s shameless adherence to political power was just as evident during the Obama administration.