You are here: Home » Library » Political Economy » Mozambique: The Revolution and its Origins by Barry Munslow 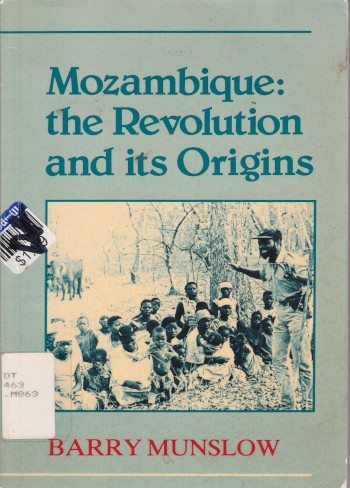 Contrary to the blather of Western ideologues and their negro lackeys, contact with the West has been of no benefit to African people. One can honestly say the sole attribute that has been created by this inimical relationship was to impart wonton sycophantic genuflection towards all things Western in the mind, body, and soul of African people. In Barry Munslow’s Mozambique: The Revolution and its Origins, he draws upon this historical encounter as the starting point of understanding the origins of the Mozambiquan revolution:

As with other parts of Africa, contact with the West over many centuries contributed to Mozambique’s underdevelopment and dependency. It began with the era of piracy and plunder by merchant capital and was consolidated by a century of direct colonial rule. Pre-capitalist African societies were penetrated, and the existing social, economic, and political systems were disrupted and refashioned to serve the interest of the dominating powers. Much has already been written about the theory of underdevelopment, and little more of a general nature need be said here. Various mechanisms were established to exploit the colonised peripheries for the benefit of the colonial metropoles. Initial investments of capital produced returns which far exceeded the sum invested, and forms of unequal exchange were established to the detriment of the African countries.[1] Barry Munslow, Mozambique: The Revolution and its Origins (New York: Longman Group Limited, 1983), 2.

By examining the political economy of Mozambique, Munslow also disabuses the reader of any notion that Portuguese colonialism had any benevolent effects for African people:

If one reads the work of the great colonial architect, Dr. Oliveira Salazar, undisputed ruler of Portugal for four decades, one is left in no doubt as to the colonial power’s economic intentions towards the colonies:

we must revise and put into execution plans for public works that are indispensable within the moderate financial resources available and have a guarantee of an effective return; and, before everything, as the highest and noblest work of all, we must organise on the best possible lines measures for safeguarding the interests of those inferior races whose inclusion under the influence of Christianity is one of the greatest achievements of Portuguese colonisation.

Not only does this passage indicate the financial motivation underlying colonisation; it also highlights the racism within the colonial ideology of the ‘civilising mission’, and gives the lie to the official multiracial mystique. In fact the racism in the ideology was necessary to guarantee an effective return, as ‘civilised’ wages and working conditions could then be considered unnecessary for Africans.[2]Ibid., 7.

The country’s domination by South Africa in a regional sub-system and the development of colonial capitalism are linked to the changing pattern of African resistance. With the abandonment of all hope of a peacefully negotiated independence, a result of Portugal’s unwillingness to decolonize, the nationalist movement of Frelimo prepared for a protracted war involving mass participation. The book provides a detailed study of the internal struggle within the Front, which culminated in the emergence of a revolutionary leadership and in growing success in the liberation struggle. Finally, Frelimo’s achievements and problems after independence, which was won in 1975, are examined, concentrating particularly on the effect of dependence on South Africa and the constant threat of external attack.  This study will not only sharpen your understanding of the rapaciousness of imperialism, but also provide a historical material analysis that will fortify praxis against the beast.