You are here: Home » Library » Political Economy » Society of the Spectacle by Guy Debord 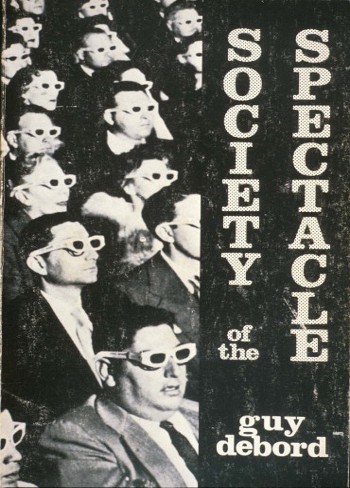 Have you ever wondered why people whip themselves into a religious like fervor whenever a new Apple product is released; or why is it that people are constantly engaged in trying to accumulate products that celebrities own? These phenomena are thoroughly deconstructed by the French Marxist theorist Guy Debord in his revelatory book, Society of the Spectacle. Spectacle is a series of 221 theses, divided into nine chapters. Debord kicks in the door and waves the 4-4 with his first premise: “In societies where modern conditions of production prevail, all of life presents itself as an immense accumulation of spectacles. Everything that was directly lived has moved away into representation.”

Debord goes on from there to analyze the purpose of celebrity, neocolonialism, urbanization, and much more. This book will give you a clear understanding of how we have gone from actually having live friends, to having a plethora of “friends” on Facebook, but can’t find any of these “friends” to come pick you up when you car breaks down on the road.