You are here: Home » Library » Readers » Globalectics: Theory and the Politics of Knowing by Ngũgĩ wa Thiong’o 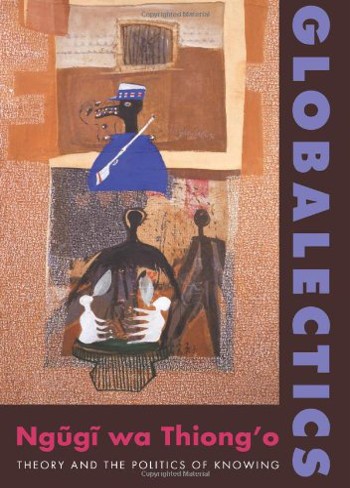 In this volume, Ngũgĩ wa Thiong’o summarizes and develops a cross-section of the issues he has grappled with in his work, which uses a combination of imagery, language, folklore, and character to “decolonize the mind.” He also confronts the politics of language in African writing; the problem of linguistic imperialism and literature’s ability to resist it; the difficult balance between orality, or, “orature,” and writing, or “literature”; the tension between national and world literature; and the role of the literary curriculum in both reaffirming and undermining the dominance of the Western canon.

Ngũgĩ elucidates the task of globalectics when he states:

Globaletics becomes the way of reading world literature. Globalectical reading means breaking open the prison house of imagination built by theories and outlooks that would seem to signify the content within is classified, open to only a few. This involves declassifying theory in the sense of making it accessible—a tool for clarifying interactive connections and interconnections of social phenomena and their mutual impact in the local and global space, a means of illuminating the internal and the external, the local and the global dynamics of social being. This may also mean the act of reading becoming also a process of self-examination.