You are here: Home » Library » Political Economy » The Black Man’s Burden: Africa and the Curse of the Nation-State by Basil Davidson 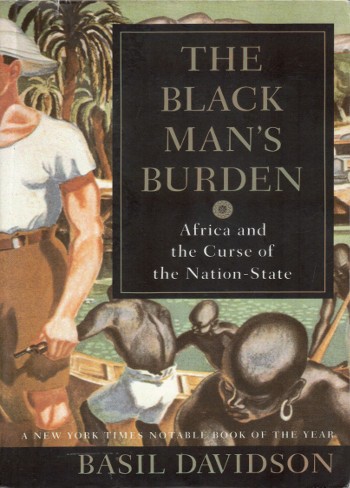 In The Black Man’s Burden: Africa and the Curse of the Nation-State, Basil Davidson posits that the failures of the nation-states in Africa after “independence” from colonial domination, can be traced to the fact the nation-state polity in Africa was a creation of Western Imperialism designed for the benefit of Europeans, and to the detriment of African people. Unfortunately (do to the rise of Western Imperialism), the history of Europe is currently seen as the history of the world, which ignores the fact that many other people around the world had polities that were designed by them to meet their specific needs, African nations included.

The nation-states of Africa were created for Western Imperialism at the Berlin Conference of 1884-1885, and maintained by colonial domination. The inextricable fact that African nation-states were created to facilitate Western Imperialism, makes them  authoritarian and bureaucratic by nature; and all attempts at progress for African people under these imperial creations, will remain tethered to the past colonial overlords, for the continued facilitation of imperial domination.  This fact makes neocolonialism an inevitable result under the current nation-state formations. The creation of nation-states in Africa represent another example of the long history of balkanization of Africa and her people, for the benefit of invaders. Davidson concludes that the nation-state as the modern world knows them to exist must cease to exist, and a new polity must be built which bolsters new economic and social relations for the total liberation of African people.