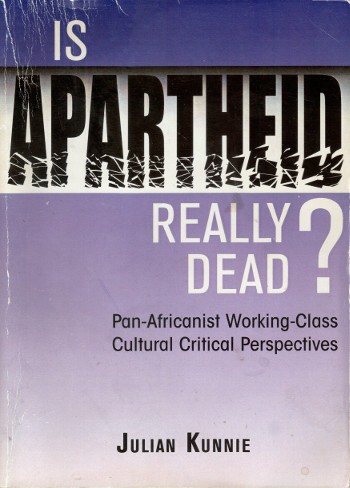 Much euphoria has been expressed about the abolition of apartheid and the emergence of post-apartheid South Africa. Utilizing a Black Consciousness working-class philosophical framework, Is Apartheid Really Dead? takes sharp issue with the optimistic outlook of post-apartheid observers, arguing that the path of capitalism that the post-apartheid government has walked signifies a pro-bourgeois dispensation that adheres to the dictates of global market forces. The value of Kunnie’s research rests upon the objective foundation that Azania/South Africa is a settler colonial nation; and that all mainstream laudatory claims of a “nonracial” Azania/South Africa is because Azania is incorrectly placed into the context of being as Steve Biko characterized as an “island of Europe in Africa”.

This banal mimicry of Europe by the Black bourgeois and their capitalist inclinations makes South Africa an active accomplice towards neocolonialism evident in much of post-independence Africa. The book illumines the neocolonial character of the South African political economy and is distinctive in that it discusses the potency and limitations of the Black trade union movement, while contending that the persistence of gender oppression, working-class exploitation, environmental despoliation, and linguistic colonization necessitate a revolutionary Black working class and rural peasant-based movement rooted in conscientization that would eventually topple the citadel of capitalism and white domination entrenched in Azania.