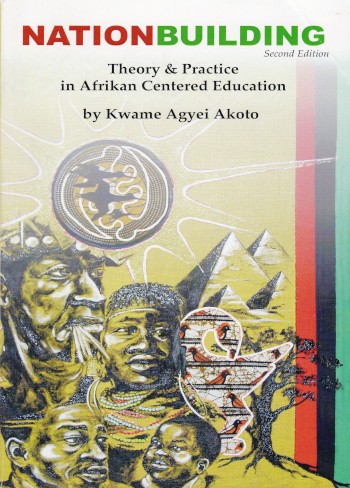 Kwame Agyei Akoto defines nationbuilding as “the conscious and focused application of our people’s collective resources, energies, and knowledge to the task of liberating and developing the psychic and physical space that we identify as ours. It involves the development of behaviors, values, languages, institutions, and physical structures that elucidate our history and culture, concertize and protect the present, and insure the future identity and independence of the nation. Nationbuilding is the deliberate, keenly directed and focused, and energetic projection of the national culture, and the collective identity. Nationbuilding is occasioned by the generation and release of tremendous amounts of energy, not unlike a pregnancy and a new birth or a spring thunderstorm and the new growth following.” (pg. 3)

In a world where european/western cultural particularities are seen as the “universal” standard of humanity, and various national/ethic/racial groups have been inculcated to accept this drivel as the quintessential way of being, Brother Akoto vanquishes this hegemonic, assimilationist, ideological bs with the second addition to his masterwork, Nationbuilding: Theory & Practice in Afrikan Centered Education. Afrikan people must come to realize that falling foolhardily to their natural enemies siren proclamations of “diversity” and “inclusion”, can only lead to perennial perdition. As implied in the title, Brother Akoto’s book also provides a very operational program for Afrikan nationbuilding. Get this book today if you are serious about building a sovereign Afrikan future, because that work must begin today!