You are here: Home » Library » Political Economy » Cultural Misorientation: The Greatest Threat to the Survival of the Black Race in the 21st Century by Kobi K.K. Kambon 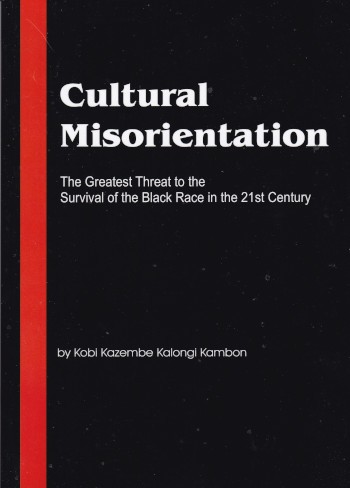 Nobody knows better than Dr. Kobi Kazembe Kalongi Kambon, that the political economy by which a society operates is based on a particular philosophical, cultural imperative, and the best way to dominate a people is to for the oppressor to deny their particular cultural imperative, and pass it off as “universal” to the oppressed. So while the oppressor can, even if some do it begrudgingly, assimilate some of the oppressed into positions of “power” within the constructs of the oppressors society and call it “diversity” or “inclusion” it is only because the oppressed has swallowed hook line and sinker what it means to exist, from their oppressor’s culture. For example, in a european/western supremacists world, to be considered an “educated” and or “normal” “functioning” Black/African one must literally be “whiter than the white man”, and this is the function of culture in a society whose political economic basis is imperial domination. The major problem is that Africans as a colonized population, have accepted this nationalistic cultural hegemony of europeans/westerners.

Hence, the term coined by our dear Brother Kambon, cultural misorientation. Culture provides the rules and regulations for a person’s/group’s existence, which is why the first thing an oppressor wants to do (after their initial invasion of a people) is control the oppressed’s “education”. Terms such “multiculturalism”, “inclusion”, etc. are really synonyms for assimilation, because the culture of a colonizer and a colonized cannot coexist, they are antagonistic.

In Cultural Misorientation (CM), Brother Kambon disabuses Africans of this chimera of “inclusion” to reveal all it’s genocidal implications. He gives the following analogy in order to understand the rationale of cultural misorientation as the greatest threat to African survival:

…take as an illustration the scenario of drugging a person (without their knowledge, of course), and this causes them to lose their memory. After which, you get them to engage in making some critical decisions affecting their life and future. Their functioning consequently is not normal and natural under these conditions; it is not optimal for them. Hence, any decisions (choices) that they make while in this altered (drugged) psychological state will not likely represent the kinds and quality choices and decisions that they would make when they are functioning in their normal-healthy psychological state. This situation conveys a similar psychological predicament to that of CM, in that CM Africans/Blacks have much difficulty in trying to accurately and effectively solve their problems (African problems) within a White/European supremacy dominated society, reality, or world. CM allows–requires Africans in America to live with “contradictions” as “normal” or “natural,” i.e., we do not “consciously” experience the racial–cultural contradictions in our lives as “contradictions”. (pg. 4)

To understand this analysis, Cultural Misorientation is an essential read for those who wish to develop an African autarky.