You are here: Home » Library » Novels » Why Are We So Blest? by Ayi Kwei Armah 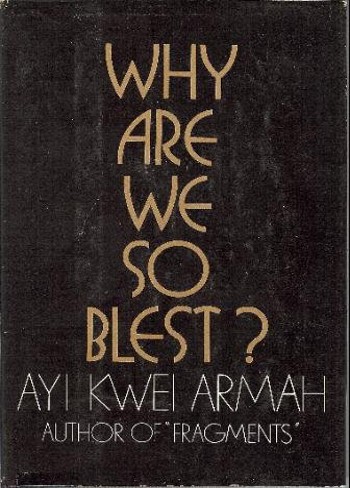 What a farce, scholarships! The blood money never went to any of us for our intelligence. It was always payment for obedience. BEFORE THE WHITE MEN CAME. Ten pages of blood and savagery. THE WHITE MAN COMES, ENGLIGHTMENT, CIVILIZATION, PROGRESS, DEVELOPMENT—any of the white man’s words for the white man’s rule. It takes obedience, not intelligence, to accept that as knowledge

Naita is right. The educated Africans, the Westernized African successes are contemptible worms. “Exceptionally uncreative people,” she said. Happy to get the degrees, then go home and relax on the shoulders of our sold people. The end of a Western education is not work but self-indulgence. An education for worms and slugs. — Modin Dofu

Ayi Kwei Armah’s third novel Why Are We So Blest?, not only deals with the world being based on the continual extraction of African resources for the development of the Western world, but creates a narrative of what this vampiric relationship looks like in the phenomenological experiences of Africans. The story unfolds through three first person narratives that are wonderfully paced. The protagonists of the story are Modin Dofu, Solo, and Aimée Reitsch.

Modin is an African from the continent who has been pegged by his white liberal paymasters as being “different” than other Africans, supposedly possessing this “superior intelligence”. After Modin is given a full scholarship to an Ivy League American university, he soon learns the price of this scholarship is that he assimilates Western values, and be white folks object for their self-actualization. He learns the lesson that Fanon discusses in Black Skin, White Masks regarding the African being an object for the desires of others, “’The Blacks represent a kind of insurance for humanity in the eyes of Whites. When the Whites feel they have become too mechanized, they turn to the Coloreds and request a little human sustenance.’”

Solo is an African from a Portuguese African colony that has been on a constant downward spiral when he realized the lessons that Modin is currently learning. Jilted by his Portuguese girlfriend when his utility as an object to her has been spent, he struggles with trying to come to terms with what it means to exist in a world where the African’s main purpose in the current political economy is to be the object for European aggrandizement.

Aimée Reitsch is Modin’s American girlfriend. She is extremely frigid, and literally is at her wits end because of the banality of her existence. Aimée is obsessed with everything “African”. Engaging in acts that “helps Africans” is the one thing that brings her sad life meaning. And what do you know, she happens to get an African boyfriend. Is it love or something along the lines of the historical relationship that Europe/America has always had with Africa-extraction and then discarding anything regarded as superfluous?

This story will definitely leave you saying “GODDAMN!” at the end. A quick anecdote about how we obtained our copy of the book. At the time we purchased this book, and writing this blurb, Why Are We So Blest? is currently not available from Armah’s publishing collective Per Ankh, and out of print. We were able to obtain a used library copy from Amazon. The irony is that the library copy we received was from Occidental College. We can’t make this shit up! Now aint that a bitch!