You are here: Home » Library » Political Economy » Destroy This Temple: The voice of Black Power in Britain by Obi Egbuna 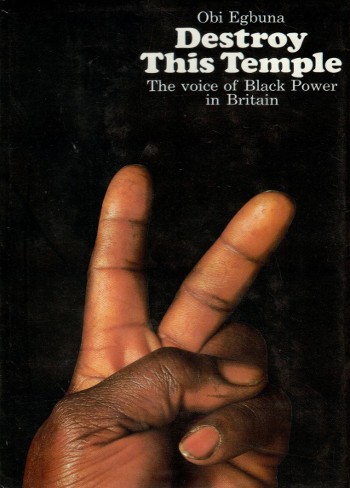 Most of this book was written in Brixton Prison, where the author was held in custody for six months pending trial at the Old Bailey on the charge of masterminding a plot to kill police officers at Speakers Corner.

In Destroy This Temple: The voice of Black Power in Britain, the late Obi Egbuna Sr. relates and analyzes the experience that prompted him to compose the document that led to his arrest. The result is the first full-scale exposition of the Black Power movement in Britain.

Obi came to England in the 1960’s on a scholarship from Nigeria. He quickly won success as a novelist, playwright and political writer.  Just as quickly he grew frustrated and incensed on seeing how Black people were treated, not only in Britain but over much of the world. The searing essays which make up Destroy This Temple range widely over racial attitudes amongst both white and Black people in Britain; the author’s involvement with the Black Panther movement; his visit to America and the profound effect on him of the meetings with Elijah Muhammad, an Indian chief in New Mexico, and a Harlem prostitute; his reactions to the Biafran War. His burning political convictions permeate every page – his theory of “intrapersonal colonialism” in the Black psyche, his dramatic enlargement of the term “violence”, his lucid concept of Black power.

Obi Egbuna Sr. long ago stopped telling white people what they want to hear. His language is Black, blunt, steeped in experience. His voice speaks from our midst, telling us about ourselves, Black and white, is powerfully persuasive, and urgently relevant  at the present moment in the racial history of the Western world.