You are here: Home » Library » Political Economy » Mentacide and other essays by Mwalimu K. Bomani Baruti 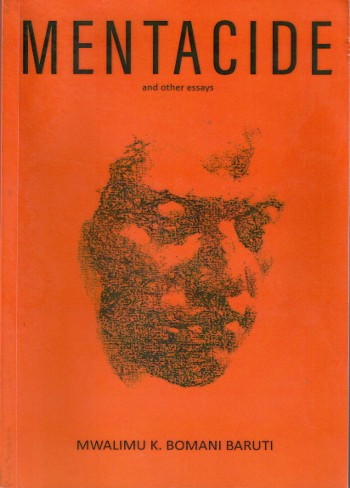 Mentacide occurs when one group willingly thinks and acts out of someone else’s interpretation of reality to another peoples’ benefit and against their survival. It is a state of subtle insanity which, over the last few hundred years, has come to characterize more and more Afrikans globally. This collection of essays addresses various aspects of this self-negating confusion.

Of particular interest in this series of essays was the one entitled “High Treason”, which takes a look at the complete 360 degree political turn that Haki R. Madhubuti has taken. We here at Conscientization 101 can vouch for the revolutionary praxis Madhubuti put down for Afrikan people in the three titles we feature in our library, but beyond those three we cannot. Long story short, after reading those titles in our library we decided to read Madhubuti’s latest work which at the time was Taking Bullets (released in 2016). In Taking Bullets Madhubuti doesn’t sound like the same person we read in his previous books. It was in Mwalimu Baruti’s book, Homosexuality and the Effeminization of Afrikan Males, that someone other than ourselves recognized how Madhubuti had reversed his politics for quite some time now. In “High Treason” Baruti delves deeper into Madhubuti’s political reversal which he first noticed in a 1994 publication by Madhubuti called Claiming Earth in a poem called “White People Are People Too”.

Mentacide is a very serious sickness that is destroying Afrikan people globally. This publication from brother Mwalimu Baruti is a fortifying text, that being said get your copy today!