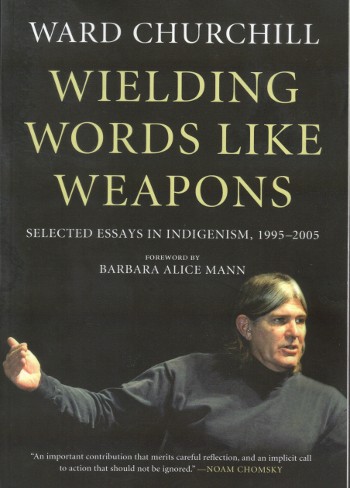 What does it mean to achieve “progress” within in a settler colonial polity? The question is rhetorical because it can only mean assimilation for the colonized — and to cut through all of the euphemisms—it means the genocide of those colonized.  Ward Churchill knows this very well. In Wielding Words like Weapons: Selected Essays in Indigenism, 1995-2005 from American Indian Movement activist-intellectual Ward Churchill, he disabuses those who call themselves “progressives” of the notion that there can be any justice for the colonized via reform. As always, Churchill correctly places the analysis for true liberation in an Indigenous-centered framework as opposed to a settler colonial framework, the genocidal framework which Churchill accurately describes:

Thus maimed before they begin, and trapped within an overall social construction in which they will be consistently denigrated, often openly reviled, and forever dispossessed of their birthright, they are forced with increasing frequency to hear sermons from their oppressors about how they should “stop whining and get over it,” that they’re now “as free as anyone else to become whoever or whatever they want.” (306)

Whether you have autochthonous roots in Turtle Island or Africa, these are sermons we know all too well as colonial subjects.

This selection of writings discusses such topics as the myth of anthropophagy in Indigenous societies, normalizing Native American dehumanization with terms such as “squaw”, Hollywood’s cinematic degradation of native people in film, the historical and ongoing genocide of North America’s native peoples, and the systematic distortion of the political and legal history of U.S.-Indian relations.

A foreword by Seneca historian Barbara Alice Mann describes the sustained efforts by police and intelligence agencies as well as university administrators and other academic adversaries to discredit or otherwise “neutralize” both the man and his work. Also included are both the initial “stream-of-consciousness” version of Churchill’s famous—or notorious­—”little Eichmanns” opinion piece analyzing the causes of the attacks on 9/11, as well as the counterpart essay in which his argument was fully developed.