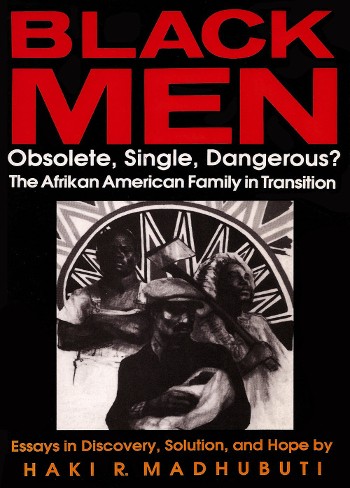 Black Men, Obsolete, Single, Dangerous? is considered Haki R. Madhubuti’s seminal, critical work that solidified him as an informed, passionate, and caring commentator on Black life, culture, relationships, and the development and stability of the Black community. This is an integral text for anyone with a vested interest in building healthy, thriving Black families and communities. Haki takes aim at some of the critical issues facing the African family in the United States. He offers useful, pointed, practical solutions for overcoming these obstacles and challenges.

This book was published by Haki’s Third World Press after publishing Enemies Clash of The Races in 1978, for which Haki was subsequently “whitelisted”. Even still with that being the case, Black Men, Obsolete, Single, Dangerous?, was published in 1991. Haki didn’t hold out hopes for it being a widely read success, but he knew the importance of holding the line for African people. Ironically, the book was immensely successful, selling over a million copies, and as a Black publisher! Keep in mind this was the time before the internet. The book was so popular that unbeknownst to us at the time (the editors were respectively 12 and 13 at the time of the book’s publication), Morehouse College purchased a thousand copies for its freshman class.

James, Senior Editor, befriended a colleague while teaching in 2001 who was part of the Morehouse College freshman class which was introduced to Haki’s book. So one day, when James, in a jovial mood, began clowning his homeboy about being “bougie” for  going to Morehouse and questioning the usefulness of this “negro” institution, his homeboy agreed on some points but countered his criticism with….”Yeah some points I can’t even argue with you, but we did get that Haki book! You didn’t get that at Texas A&M huh!” No my brother we sho nuff didn’t! The history behind conscientization 101 is definitely not a linear path, and is always continuous!