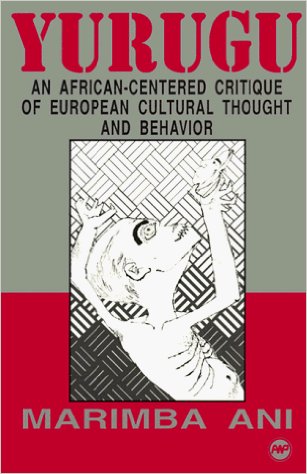 Yurugu removes the mask from the European facade and thereby reveals the inner workings of global white supremacy: A system which functions to guarantee the control of Europe and her descendants (the few) over the majority of the world’s peoples (the many). It is a devastating critique which uniquely focuses on the intellectual/cognitive rules by which this system of dominance operates: the assumption, ascendance, and valorization of the rational mode.

Dr. Marimba Ani exposes the roles of both the academic and Christian establishment in proselytizing as “universal” that which is indeed culturally specific to Europe and which therefore functions in the interest of European dominance, since that is the nature of the asili.

After purchasing this book a little over a decade ago, we are finally happy to say that we have finished this masterpiece from Dr. Marimba Ani. This book is nothing to play with it! Dr. Ani did her research. All we have to say is this sister opens almost every chapter with a quote from Ayi Kwei Armah’s Two Thousand Seasons, and this sister knows about our main man Chinweizu, so what are you waiting on?! Get it now!