EP.002: Opportunities, Obstacles, and Prospects in Venezuela with Leo Lameda

Mural at the 4th of February memorial in Caracas, Venezuela. February 4, 1992 is when Comandante Hugo Rafael Chávez Frías led a group of soldiers to capture the government for the Venezuelan people. At the time the government was under the corrupt IMF backed leadership of Carlos Andrés Pérez, which was wreaking havoc on people’s ability to survive. Chávez’s body lies in state at the 4th of February memorial.

On March 5, 2013 the charismatic and revolutionary president of Venezuela, Hugo Rafael Chávez Frías, died seemingly unexpectedly. While it was known that Chávez had undergone operations in Havana, Cuba to remove an abscessed tumor with cancerous cells, it was reported prior to his death that his cancer had undergone a complete remission. Questions immediately began to surface about what turn the country would take now that Chávez had passed away. Media from the United States empire, in its traditional fashion, praised the death of Chávez, while throughout the world oppressed people who struggle against capitalist imperial domination were in severe mourning at the passing of a this man who stood up to the empire so that the Venezuelan people, and all oppressed people, could be free and define their own terms for existence. 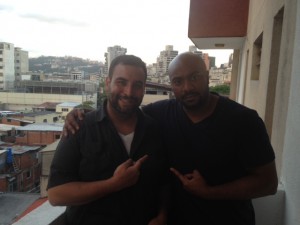 On June 17, 2013 thru June 27, 2013, C-101 editors went to Venezuela to get a firsthand account of Venezuela post Chavez. In our extensive travels throughout the country, we saw a politically astute people that were shaken by the death of Chávez but not bowed, and were determined not only to maintain all the progress that was made under Chávez’s leadership, but to take that progress to the next level.  During out stay, we had an extensive conversation about contemporary Venezuelan history, a Chávez-led Venezuelan government, and the future of Venezuela post Chávez with interpreter/fixer/translator Leo Lameda.

Leo was our focal point during our sojourn into Venezuela, is fluent in three different languages (Spanish, French, and English), works with Global Exchange, and is extremely knowledgeable about the political economy of Venezuela.

The music featured in this episode is “This Ain’t Living” and “I Wanna See” by Caxton Press from their This Ain’t Living / Hunger single and album Shame the Devil – Instrumentals, and “Robbers, Barons, And Bankers” by Wise Intelligent from his album El Negro Guerrero. Also featured is commentary from Kwame Ture.