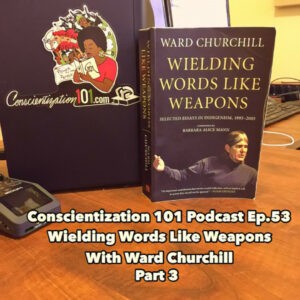 In the riveting conclusion of our three part series with acclaimed American Indian Movement activist-intellectual Ward Churchill about his venerable book Wielding Words Like Weapons: Selected Essays In Indigenism, 1995-2005, we discuss the effects of the settler colonial polity of Canada on American Indians.

We investigate this phenomenon by examining the chapter titled “Kizhiibaabinesik”. The chapter is a poignant dedication to brother Ward’s late wife Leah Renae Kelly.

Be on the lookout for the forthcoming book from Ward Churchill available for pre-order, From a Native Son: Selected Essays in Indigenism, 1985–1995.

And for more works by Ward Churchill, click here.