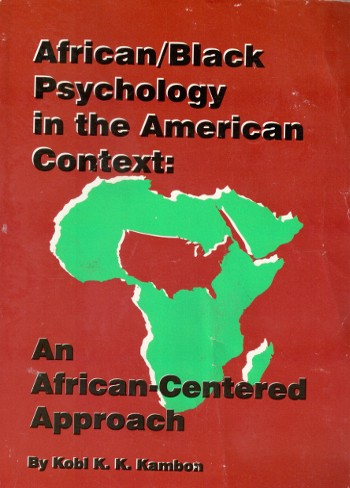 Kobi K.K. Kambon’s African/Black Psychology in the American Context: An African Centered Approach is an essential read for African people worldwide. He purposely uses the term “African/Black” throughout the book to psychologically heal African people who have been strategically taught by our enemies to balkanize and identify ourselves based on false nationalities that are defined on the basis of who kidnapped or colonized us. Brother Kambon uses these specific terms so we can begin to see ourselves for who and what we are; which means there is no dichotomy between being “African” and being “Black”, the two are synonymous.

So much more we could say about this book, so do yourself a favor and pick it up. We know this book is hard to find because it is no longer in print, so if you can’t obtain a copy from Amazon (because the price is too high or it is no longer available), we suggest you check your local library. They have interlibrary loans that can help you get your hands on almost any book.