You are here: Home » Library » Readers » Barrel of a Pen: Resistance to Repression in Neo-colonial Kenya by Ngũgĩ wa Thiong’o 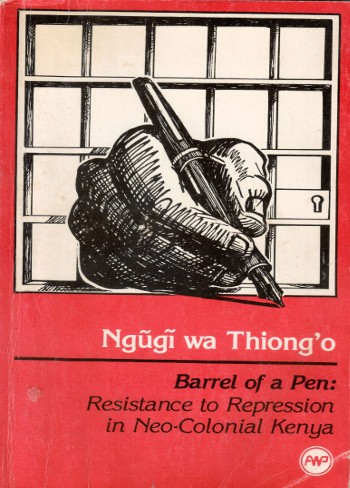 Barrel of a Pen is a collection of essays that vigorously responds to the atmosphere of repression and domination in Kenya. Ngũgĩ argues that the defense of national culture and national identity is central in the overall struggle against regimes of repression and imperialist domination.

The thesis was tested on the ground by Kenyan cultural workers and activists who, in collaboration with peasants and workers, attempted to develop and express their culture. In the late 1970’s they performed such plays as Ngaahika Ndeenda (I Will Marry When I Want) and went on to form the Kamiriithu Education and Cultural Center. The Kenyan government responded brutally to these developments of cultural assertion and by March 1982 the Center was razed to the ground, and all drama and theater activities in the area of Kamiriithu were banned.

These essays speak to the issues of cultural domination of Africans by colonialism, and now neocolonialism, wherever we might find ourselves in the world.