You are here: Home » Library » Novels » God’s Bits of Wood by Ousmane Sembène 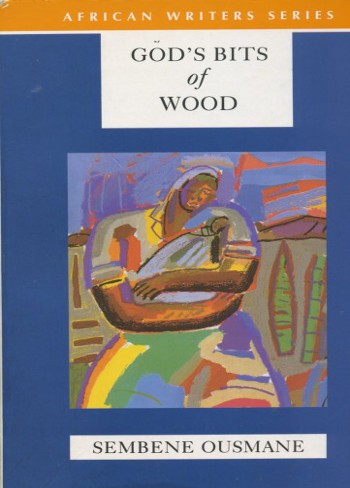 Ousmane Sembène crafts a richly visceral story about a railroad strike in French colonial Africa. There are a large cast of characters that are situated throughout French colonial Africa (primarily Bamako, Thiès, and Dakar), which literally imparts to the reader the dialectics of struggle. What you begin to see is that the strike causes an evolution in the self-perception of the strikers themselves, one that is most noticeable in the women. These women go from merely standing behind the men to walking alongside them and eventually marching ahead of them. When the men are able to work the colonial factory jobs that the exploiting, imperial, French railroad provides them, the women are responsible for running the market, preparing the food, and rearing the children. But the onset of the strike give gives the role of bread-winner—or perhaps more precisely, bread scavenger—to women.

Sembène is able to articulate the pain, humiliation, and other contradictions that are constituent elements of being an African colonial subject, but it is Sembène’s ability to highlight the daily degradation of the most oppressed sector of colonialism, the African woman, which makes this book so powerful. African women during the colonial era (and still to this day in the neocolonial era) were deprived of their ability to speak on matters including society as a whole, but as Sembène demonstrates these contradictions dissipate as the women engage in struggle which empowers them to become subjects in the world. This novel demonstrates that the oppressed will never make any progress by fighting “racism” or “sexism” (how the hell can you do that other than by trying to appeal to your oppressors morality. SHIIIITTT!!!), but by engaging in principled struggles that involves empowering the oppressed. Get you some power and those “isms” disappear.