You are here: Home » Library » Novels » Devil on the Cross by Ngũgĩ wa Thiong’o 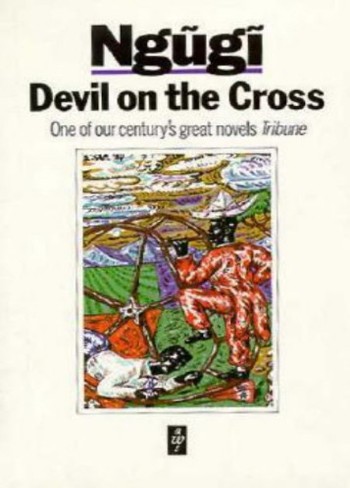 Devil on the Cross is an intricate novel centered on a big feast called “The Devil’s Feast” by a group of student activists who want to expose the true nature of “A Competition to Select Seven Experts in Modern Theft and Robbery”. This competition is to be held in a remote cave in IImorog, a village in a remote part of Kenya. There are several characters traveling to Ilmorog, all of which were invited to this feast with the forged cards the students made in their efforts to reveal the neocolonial and colonial elements that will be in attendance. Ngugi writes a detailed narrative which gives each character’s subjective life experiences a basis in the objective realities which are maintained by all the thieves and robbers in the cave. These thieves and robbers are not petty thieves, the players are required to show how they are able to steal, control, and manipulate entire countries and their populations. The story uses magical realism to illustrate each character’s realizations on the dialectical impact the actions of “The Experts in Modern Theft and Robbery” have on their lives.

Also check out what C-101 editors have dubbed the official/unofficial soundtrack for this book, The Thieves Banquet by Akala.