You are here: Home » Library » Political Economy » Bury My heart At Wounded Knee: An Indian History of the American West by Dee Brown 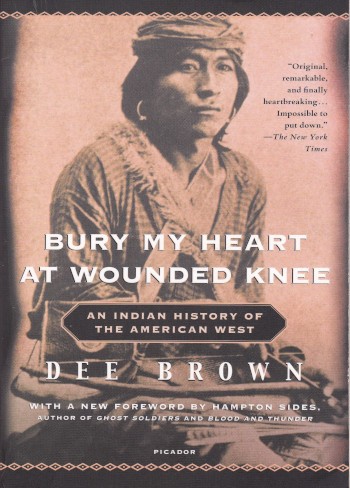 The popular notion that the United States of America is “a nation of immigrants” is not merely a misnomer, but it is a euphemism that surreptitiously cloaks what it really is…A EUROPEAN/WESTERN, SETTLER COLONIAL POLITY! A settler colonial polity’s essence is genocidal, and while some give unctuous acknowledgment that the American Indians where/are systematically exterminated by european settlers, what is cognitively operative in the notion of the U.S. being “a nation of immigrants”, is that the genocide committed against American Indians, while it was a bad thing, did not constitute the destruction of a nation/nations of people. At best it says, “an atavistic people regrettably had to be removed to make way for the greater good of universal humanity, the U.S.”, and at worst it says, “their extermination is like the clearing of the land, we call them ‘natives’ because they are ‘natural people’ similar to animals.”

Dee Brown’s classic Bury My Heart At Wounded Knee: An Indian History of The American West, gives present truth to the lie of the United States being a “nation of immigrants”, and paints a very elucidating nonfiction narrative account of the genocidal construction of the United States for what it truly is..A EUROPEAN/WESTERNER SETTLER COLONY! What he presents are cowardly, bloodthirsty invading european hordes that time after time, violate their own laws and purported “morals and Principals”, in order to exterminate American Indians without one iota of compunction. This is a mandatory read because it shifts the narrative from the invading settler’s point of view (i.e. some sort of innocuous “settling of the West”), to the American Indians who resisted the complete destruction of their nations. When reading this book, one learns that the U.S. engages in total warfare with people who are non-european to this very day. Check out this book, if you truly want to know “how the West was won.”