You are here: Home » Library » Novels » I Will Marry When I Want by Ngũgĩ wa Thiong’o & Ngũgĩ wa Mĩriĩ 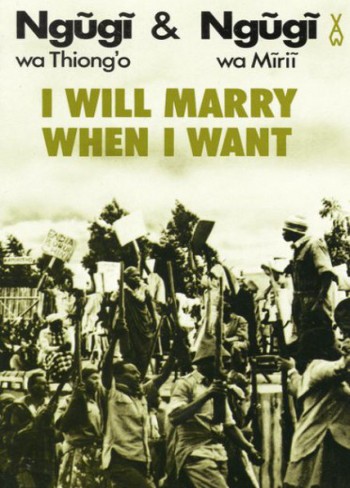 This is the play that was responsible for Ngũgĩ wa Thiong’o being detained without trial (which was the impetus behind his book entitled Detained: A Writer’s Prison Diary), and Ngũgĩ wa Mĩriĩ being driven into exile in Zimbabwe, and ultimately being banned by the neocolonial government of Kenya. I Will Marry When I Want proved so powerful, not only because of the wonderful story, but because the actors, who were Kikuyu workers and peasants at the Kamĩrĩĩthũ Cultural Centre at Limuru, were involved in conscientization. That is, the workers and peasants were becoming aware of their role in the world as social agents, as opposed to beasts of burden or objects to be acted upon for neocolonial exploitation.

The story deals with neocolonialism in Kenya (remember there is no such thing as an “African Dictator”, but there is such thing as a neocolonial puppet), and how it uses their negro lackeys to exploit an African farmer and his family by demonizing the institution of marriage as officiated by Gĩkũyũ tradition. This is a story all African people throughout the world will intimately be able to identify with.