You are here: Home » Library » Novels » KMT: In the House of Life by Ayi Kwei Armah 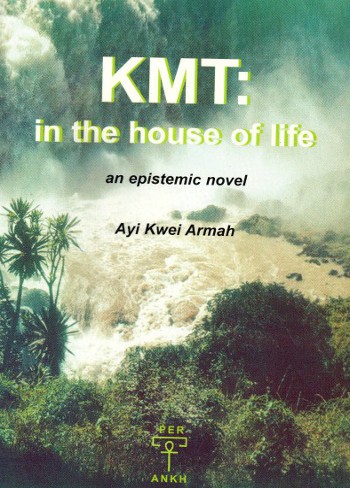 Mourning a lost friend, Lindela, the narrator of KMT, Ayi Kwei Armah’s seventh novel, plunges into history, seeking meaning in life’s flow. Loving companions – an Egyptologist and two traditionalists – show her secret hieroglyphic texts left by migrant Egyptian scribes millennia ago. As Lindela translates them, old questions animating her search for knowledge of self and society acquire a sharpened urgency: How best can Africa’s multimillennial history be envisioned as one continuous stream? Why did the society that invented literacy sink into the misery of illiteracy, ignorance and religion? What creative African values lie buried under the lethal debris of slavery, colonialism, structural adjustment and globalization? And why did the ancient scribes call the concept of Maât our best promise of regeneration? KMT is the narrative of an African woman’s life quest, and of the answers she uncovers.

This book is described as “an epistemic novel” on its cover and this captures the essence of this story well. Armah wrote a novel which chronicles the struggle of how knowledge is disseminated and whether it will be used to foster critical pedagogy amongst the masses of people or hoarded by a select few bent on control through arbitrary grants of authority and privilege. Through various narratives written by African scribes this novel prescribes a blueprint for social relations that rival all the sacred texts we are told represent the best of humanity.