You are here: Home » Library » Novels » Sanhat by Shemsw Bak 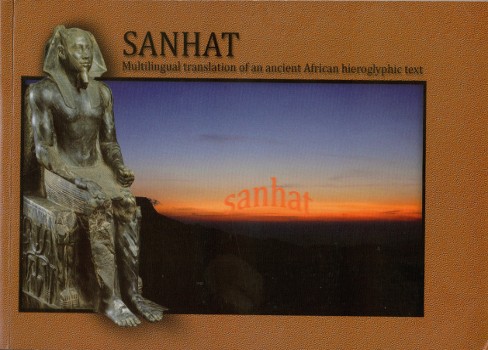 SANHAT, among Africa’s oldest written literary texts, comes from the time of King Sehotepibre, three thousand eight hundred years ago. Sanhat, an officer returning from Libya after a military expedition, hears messengers summon the prince Senwosret urgently to the capital: The pharaoh is dead. Sanhat overhears other messengers summoning other, younger princes back. Fearing a bloody palace coup, he flees to Palestine. There he prospers. But dreading the prospect of dying abroad, he obtains a royal pardon, and returns to Egypt, bringing his life to a satisfactory close.

As the introduction to the text by the Shemsw Bak collective says, “this text gives readers an opportunity to envision an African society that existed long before the Arab and European invasions,” and it is through envisioning ourselves as self a governing people, that we will be able to restore our accurate social memory. And it is through our accurate social memory that the seeds of thought necessary to germinate a liberated Africa society can be planted.