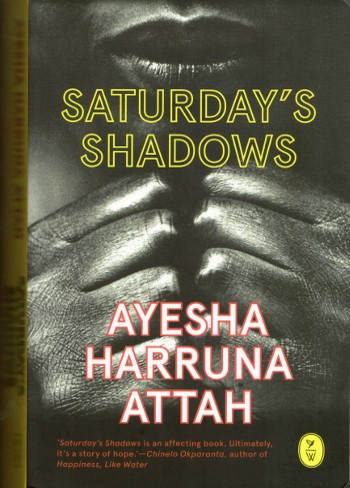 Set in 1990’s West Africa, Ayesha Harruna Attah’s second novel Saturday’s Shadows, introduces us to the Avoka family, a family that is struggling to maintain its cohesion in the midst of a tenuous political setting. After the seventeen-year neocolonial military dictatorship of Dr. Karamoh Saturday, Saturday decides  to give up his position as supreme leader in order to transition the country into “democratic rule”, our protagonists find themselves trying to reconcile their country’s past, as well as deal with their present situation, to figure out what the future may hold for them. As they learn, Saturday casts a long shadow.

In Saturday’s Shadows, Attah proves once again her proficiency as a writer. She demonstrates her dexterity as a writer with the accuracy and lucidity of her character development. You will love the characters Kojo and Atsu! Don’t want to say too much about the plot, but the African proverb Attah opens with says it all, “If you have no time to attend to your illness, you get time to die.” Now get the book!