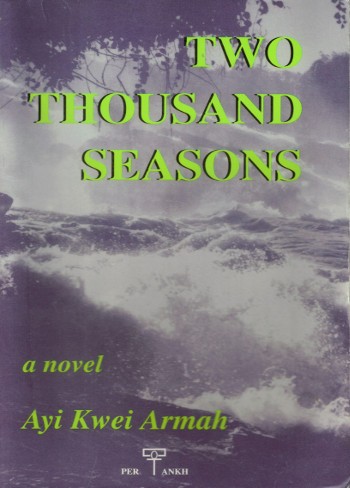 As we read Ayi Kwei Armah Two Thousand Seasons, two things immediately came to our minds: Akala’s track from his The Thieves Banquet album “Maangamizi”[1]Being so moved by this book, C-101 editors decided to research more about Armah and his work, and came across a video lecture entitled “Awakening”. From this video we learned that it was not just … Continue reading, and that eternal question all African people ask each other, no matter wherever we are in the world, “Where can we go where they aren’t so hard on Black folks?” Armah tells the story of Africa and her people in Two Thousand Seasons. This is a story of a people who lived in a dialectical harmony known as “our way, the way”, but who were forced from this harmony due to alien invasions. The first of these invasions was from the “white predators from the desert”—the Arab invasion/settlement in Africa. These Arab invasions initiated many forced migrations by African people throughout the continent for safety and also made us a “community shattered into hustling zombies, our separate energies laboring to support, to comfort parasitic, predatory, alien conquerors.” From this Arab enslavement and dispersal of African people, next came the “white destroyers from the sea”—European invasion/settlement. What Armah has brought together in Two Thousand Seasons is a story written beautifully in allegorical tone, which shifts from autobiographical and historical details, and sets forth a clear way for the redemption of Africa and her people after millennium of white invasions. This novel places the dialectical underdevelopment/development between what is contemptuously known as “sub-Saharan Africa”, North Africa—misnomered “white Africa” — and Europe, into the forefront of the mind. The European Industrial Revolution and Enlightenment period has a direct correlation to the sacrifice of African people which saw the rise of European affluence and dominance in the world. Africans being dispersed and enslaved by Arab invasion makes it clear why we were weakened with the coming of European invasion, and to this day Arab settler colonialism in North and parts of West Africa has resulted in the dire consequences Africans face on the continent (Mauritania still practices enslavement of African people to this day).

Two Thousand Seasons, makes one understand that the term “black African” is not only incorrect but an imperial term that has been constructed by those who have invaded Africa. The truth of the matter is Africans are black. While Africans are of different hues of black, invaders of Africa are not “Africans”, and their colonizing hackneyed platitude of “Africa is for everybody” must be properly seen as propaganda that is used by all invaders to justify and facilitate their plunder of Africa. These invaders never come to spread African culture and fortify our polities, they have come to utterly destroy us and take us away from “our way, the way”. Ultimately Armah correctly points out that African people’s vocation to end this genocide of Africa and her people is not to seek safety as an end—which is really a form of escapism—but we as a people must join together and become “destruction’s destruction”. Our goal should not be solely for safety, but to achieve safety by returning to “our way, the way”. “Our way” is to foster creation as opposed to destruction. Hotep!