You are here: Home » Library » Political Economy » Catching Hell In The City Of Angels: Life And Meanings Of Blackness In South Central Los Angeles by João H. Costa Vargas 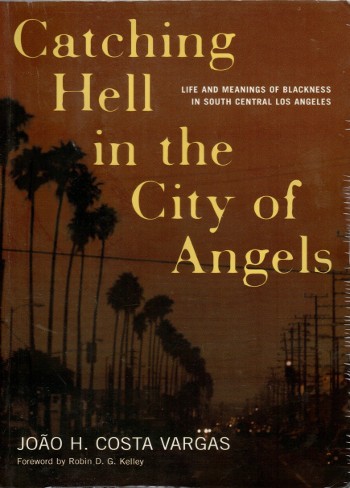 Since the 1980s, Los Angeles has become the most racially and economically divided city in the United States. In the poorest parts of South Central Los Angeles, buildings in disrepair—the legacy of racial unrest. Moving beyond stereotypes of South Central’s predominantly African residents, João H. Costa Vargas recounts his almost two years living in the district. Personal, critical, and disquieting, Catching Hell in the City of Angels examines the ways in which economic and social changes in the twentieth century have affected the Black community, and powerfully conveys the experiences that bind and divide our people.

Through compelling stories of South Central, including his own experience as an African from Brazil, Vargas presents portraits of four groups. He talks daily with women living in a low-income Watts apartment building; works with activists in a community organization against police brutality; interacts with former gang members trying to maintain a 1992 truce between the Bloods and the Crips; and listens to amateur jazz musicians who perform in a gentrified section of the neighborhood. In each case he describes the worldviews and the definitions of “Blackness” these people use to cope with oppression. Vargas finds, in turn, that blackness is a form of racial solidarity, a vehicle for the renewal of African culture, and a political expression of revolutionary Black nationalism.

Vargas reveals that the social fault lines in South Central reflect both contemporary disparities and long-term struggles. In doing so, he shows both the racialized power that makes “Blackness” a prized term of identity and the terrible price that Africans in America have paid for this emphasis. Ultimately, Catching Hell in the City of Angels tells the story of internally colonized populations in the United States through the lives of individuals from diverse, overlapping, and vibrant communities.