You are here: Home » Library » Political Economy » Imperial Reckoning: The Untold Story of Britain’s Gulag in Kenya by Caroline Elkins 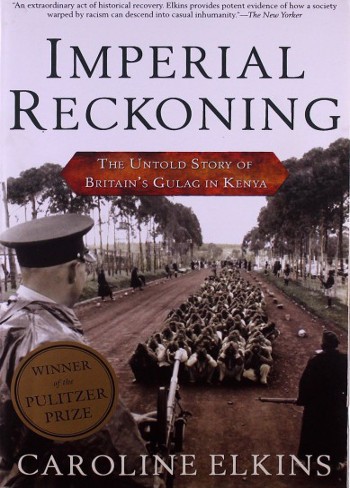 Caroline Elkins, a historian at Harvard University, has done a masterful job setting the record straight in her epic investigation, Imperial Reckoning. After years of research in London and Kenya, including interviews with hundreds of Kenyans, settlers, and former British officials, Elkins has written the first book about the eight-year British war against the Mau Mau. She concludes that the war, one of the bloodiest and most protracted decolonization struggles of the past century, was anything but the “civilizing mission” portrayed by British propagandists and settlers.

Instead, Britain engaged in an amazingly brutal campaign of outright genocide. While only 32 white settlers were killed by Mau Mau insurgents, Elkins reports that tens of thousands of Kenyans were slaughtered, perhaps up to 300,000.  The British also interned the entire 1.5 million population of Kikuyu, the colony’s largest ethnic group, in barbed-wire villages, forced-labour reserves where famine and disease ran rampant, sexual torture, and prison camps that Elkins describes as the Kenyan “Gulag.” The Kikuyu were subjected to unimaginable torture, or “screening,” as British officials called it, which included being whipped, beaten, sodomized, castrated, burned, and forced to eat feces and drink urine. British officials later destroyed almost all official records of the campaign. And these are the people Africans are supposed to model ourselves on….anyone who subscribes to this model is a psychopath and a pervert!!