You are here: Home » Library » Political Economy » Something Torn and New: An African Renaissance by Ngũgĩ wa Thiong’o 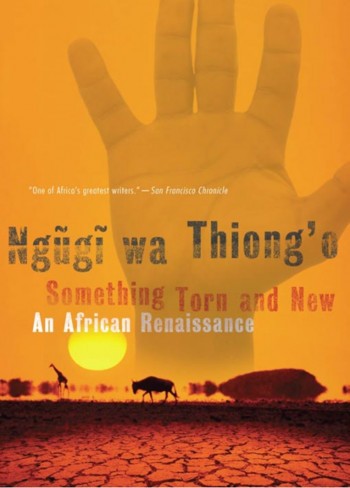 Kwame Ture, that great son of Africa said, “power begins on the level conception,” this is the best way to describe Ngũgĩ wa Thiong’o’s Something Torn and New: An African Renaissance. Ngũgĩ gives a historical materialist account of how African people lost their ability to conceive of power for themselves; Ngũgĩ properly pinpoints this tragic dislocation of African people from humanity in two stages of the history of the African continent. The first stage is the brutal division of Africans in two halves: the creation of continent and its diaspora. The second stage was the division of the African continent at the Berlin Conference of 1884, which established false borders drawn along the lines of which European nation controlled what part of Africa.[1]Ngũgĩ wa Thiong’o, Something Torn and New: An African Renaissance, (New York: Basic Civitas Books, 2009), 5. So when these two factors are taken into account what we have is this: “just as slave plantations were owned by various European powers, so post-Berlin Conference Africa was transformed into a series of colonial plantations owned by many of the same European powers.”[2]Ibid., p. 5-6. Understanding these stages in the underdevelopment of Africa, one is able to see why Africans can only conceive of power through the eyes of their colonizers. Ngũgĩ lucidly explains how the first thing a colonizer does is totally dehumanize the colonized by acts of physical brutality. This torture does not end with rape, force-feeding feces, and other barbarous acts—oh no—the colonizers must have complete control of the colonized’s mind if they are to fully build their political economy upon the total dehumanization of the colonized. As a result, in addition to the brute force of colonialism, is the inculcation of the colonizer’s cultural memory.

Ngũgĩ skillfully draws the comparison of the tactics Britain used on their first colonial subjects, the Irish, with that of African people, to show that the quintessence of all colonialism is to destroy the cultural memory of the colonized. So what and where does this thing called African Renaissance fit into regeneration of African self determination? Does it reconcile the separation of Africans scattered throughout the world with those on the continent? Does this African Renaissance have a material basis that plays a role in a Pan-African objective which “will translate into a network communication—air, sea, land, telephone, Internet—that ease intracontinental movements of people, goods, business, and services;” and where “Africa becomes a power bloc able to negotiate on a equal basis with all other global economies?”[3]Ibid., 88-89 Is this African Renaissance just the latest expression of the African petty bourgeois dream of imitating any and everything Western? After all, it is called “African Renaissance”! Not to worry, Ngũgĩ fleshes out all of these questions and more.

The genius of Ngũgĩ lays in his mastery of dialectical materialism as a tool; this is demonstrated by Ngũgĩ demystifying the European Renaissance: “Marx cites the turning of Africa into a warren for the hunting of black skins alongside the entombment of the original inhabitants in the gold and silver mines of America as signaling the rosy dawn of capitalism, a capitalism that came dripping with blood and dirt to the core. This act literally turned Africa into the dark side of the European Enlightenment, a darkness that lasted from the seventeenth century to the mid-twentieth century. What ensued was a hiatus in African development—that is, development seen as organically arising out of a balanced interplay of the internal and external contradictions in society. It put in motion what Walter Rodney has described as the development of underdevelopment.”[4]Ibid., p. 70-71. Understanding this relationship, one begins to see the essential role consciousness plays in dislocating this implanted colonial consciousness in order to recover African people’s ability to conceive of power. To make it plain, African people do not have the same culture as Western civilization, and it is the goal of all colonizers to make their colonial subjects identify their interests as inextricably linked to theirs (think about how “African-Americans” see their political interests with the United States and not Africa, and how that has been working out for African people worldwide).

Whether one likes it, acknowledges it, accepts it, or not, “The European Renaissance is a thing of the past, and we know the kind of modernity it generated and understand its impact on the world.”[5]Ibid., p. 80. So while the “African renaissance is just a century old,” and “we cannot predict its ultimate shape, destiny, or impact on Afro-modernity and the world,”[6]Ibid. reading this book is a step in the right direction toward reconciling the latter contradiction.