You are here: Home » Library » Political Economy » Agents of Repression: The FBI’s Secret Wars Against The Black Panther Party and The American Indian Movement by Ward Churchill and Jim Vander Wall 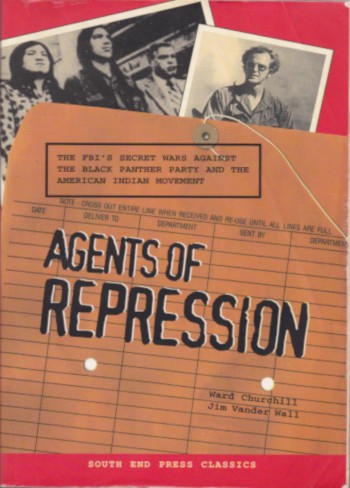 This mentality and operational priorities of the FBI have remained constant despite the supposed “reforms” it underwent during the late 1970’s. In light of the Homeland Security Act, a measure which formally sanctions many of the worst abuses in which the Bureau engaged a generation ago, every activist in the country should become intimately acquainted with the experiences of the Black Panther Party and American Indian Movement.

This second edition features a new preface by Ward Churchill exposing the FBI’s recent efforts to prevent a presidential pardon of Leonard Peltier and its ongoing cover-up of a roster of murders of Aim members and sympathizers. Churchill pays particular attention to the FBI’s infiltration of AIM and the murder of Anna Mae Aquash.