You are here: Home » Library » Autobiography/Biography » Inadmissible Evidence: The Story of the African-American Trial Lawyer Who Defended the Black Liberation Army by Evelyn A. Williams 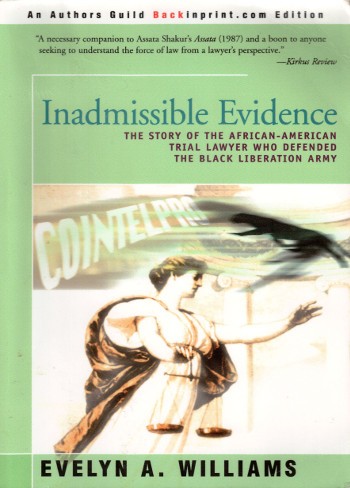 Criminal trial lawyer Williams pays attention to gritty details while relating the events of her life: growing up black and female in pre-World War II America; coursing through a white-male-dominated legal academy; being aunt and legal counsel to Assata Shakur, aka JoAnne Chesimard, a Black Liberation Army member hunted by the FBI. Williams’s parents had migrated north to escape the virulent racism of the South, but they made sure their daughter knew the history and condition of blacks in America. As a trial lawyer, Williams dedicated herself to protecting the rights of poor blacks in New York City. With Shakur implicated in reports of violence by the Black Liberation Army, Williams’s family endured increased assaults and surveillance by federal officers.

Shakur’s notoriety climaxed in the spring of 1973, with her involvement in a shootout on the New Jersey Turnpike that left one state trooper and a civilian dead. Williams’s account of the trial, in which she defended Shakur, is the pragmatic, legal counterpart of her niece’s own sensational autobiography; Williams is keenly dispassionate about the events leading to the latter’s famed escape attempt from a maximum security prison in 1979. The overriding theme of this book is that the justice system in the United States is capable of thwarting any progress toward actual justice when it has a political agenda. No matter how much evidence or skilled lawyers we employ, especially the colonized, the United States justice system is relentless in making sure they silence any opposition or resistance to their hegemony.