You are here: Home » Library » Novels » Matigari A Novel by Ngũgĩ wa Thiong’o 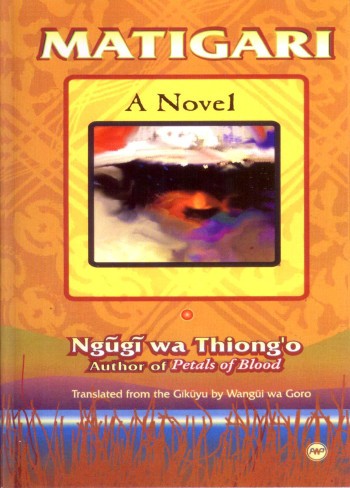 Matigari ma Njirũũngi (which means in Gĩkũyũ “the patriots who survived the bullets”—the patriot who survived the liberation war, and their political offspring), descends the mountains victorious after fighting in the long independence war against British colonialism, ready to start life anew in his recently liberated nation. He lays down his arms and girds himself in a belt of peace, and sets about to find his family and reclaim the house that he built which the colonizer had stolen from him.

But what is waiting for Matigari is not a nation free from oppression and exploitation—but quite the opposite—he finds a nation within the firm grip of imperialism’s last and most horrific stage…NEOCOLONIALISM! To Matigari’s dismay, the national liberation struggle only brought about an ostensible retrenchment of British colonialism; but in actuality the African sellouts (“loyalists”) have ascended to play their historical role of comprador in the service of their British masters. In the midst of immense poverty and misery Matigari comes to the conclusion that, “Our first independence has been sold back to imperialism by the servants they put in power!” Matigari becomes a legend when he sets about his country asking the question, “Where in this country can a person who is girded with a belt of peace find truth and justice?” You’ll have to read the book to find out the answer to this question.

As usual, Ngũgĩ writes a stellar novel where he exposes neocolonialism with plenty of sardonic quips, wit, and charm. When the novel was released, it was so well written and detailed that the Kenyan government issued an arrest warrant for the fictional character, Matigari, mistaking him for a real person. Upon the comprador regimes realization that Matigari was a fictional character, they resorted to banning the book; proving that the heroic spirit of Matigari is a constant threat to oppressors and their sycophants.